Working on the Dairy Farm

Working on the Dairy Farm, growing up Dairy: from the small family farm to large dairy Co-op

Working on a large dairy farm is much like working in any corporate setting. You may be outside, you may be working with animals, but when push comes to shove, it is a business like any other. You have to make sure the product you are producing is high quality while keeping costs down. There are wages to consider and regulations that need to be adhered to.

When I worked on a large dairy farm, I soon found out I had a lot to learn. I grew up on a small family-owned dairy farm. The stalls for the cows were stationary, and each milking cow had her particular spot in the barn. They had over 800 milking head, a 16 cow parlor, milked around the clock, and the stalls were all free stall. The premise was entirely new for me, and although I understood the basic milking principle, the way the farm was operated was totally different.

First I had to punch in and out like any company. I had specific hours in which I worked, and had co-workers. I started off working part time on weekends while I finished school. I feed the calves in the morning. While my father’s farm had maybe 10 calves at most at any given time, this farm had well over that. Each calf had to be given specific milk or water, the pens needed to be cleaned, some needed medicine, and all had to be looked after. Just feeding all the calves took over 2 hours, and this had to be done twice a day.

After I finished school I started working there full time. In the beginning, I worked in the parlor milking cows or in the barn doing what they called “rounding up”. The cows were separated into different groups by pen. Each of the two free-stall barns had 4 large pens ranging from heifers to “hospital” (or sick) cows, dry cows, regular milking cows, along with other groups.

While working in the parlor, there was a specific system of leg bands which would tell you which quarters were bad and needed extra care or had mastitis, if there was a dry teet, or if the milk shouldn’t go into the big bulk tank. This was a way for everyone who milked to know what to do. Milking would go through all of the groups, then a short shut down would occur where the parlor was cleaned and sanitized, and the rotation would start again. On average all the milking cows went through the parlor roughly 3 times per day. The milking machines were all automated, you would clean the teets, push a button which would allow suction on the cups and put the milking machine on the cows teets, and that was it. The machine had a gage, and would shut off and a mechanical arm would automatically pull the machine from the cow. There were 8 cows on each side, and once they were all done, there was a hydraulic system which would lift up the entire outer side of the parlor bar releasing the cows. The bar would come down once the cows where through and eight more would filter in. This made milking very fast. 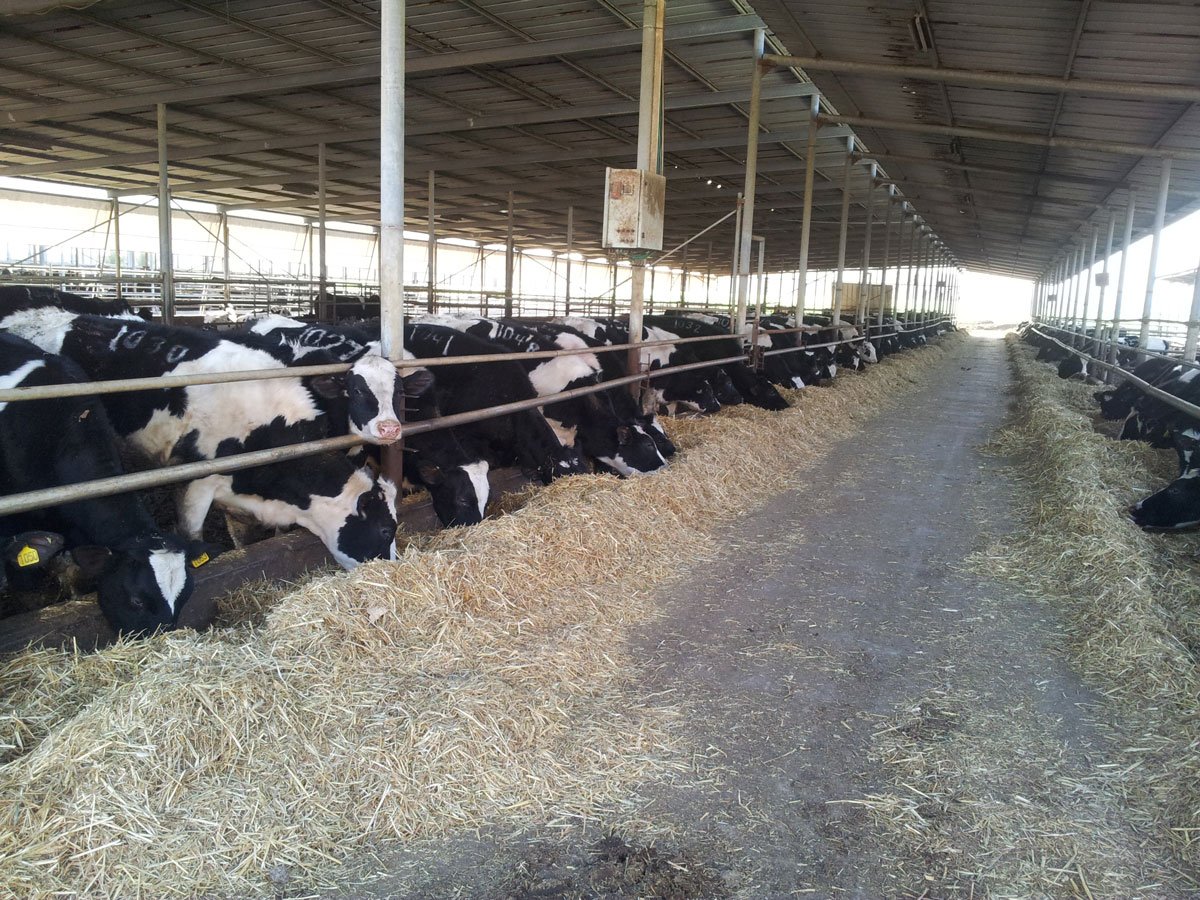 If I was doing the round up that day, my job would be to watch when the milking group was almost done. Once it finished up I had to switch gates, get the next group of milking cows into the holding pen for milking, and get the last of the group before into their pen. Two people were needed at any given time for the milking to go smoothly.

Other duties while rounding up would be to use the bobcat to push in the feed closer to the cows so they could easily reach it, check and administer medicine if necessary to the hospital group, and clean pens as needed while they were being milked. Where I worked they had a flushing system. The pens all sloped inward to a main isle. At the end of the pen you would release a huge valve which would push out water down the free stall isles, cleaning away the faeces left by the cows. It would flow into the main isle and down into a holding tank. They had two large lagoons which held the water for flushing, and it was reused to conserve water after filtering out the solid pieces. They had a large separator for this purpose.

There was a separate little barn, called the maternity barn, where cows about ready to calve would be held. This allowed them to have their own separate pen for calving and made it easier for workers to keep a close eye on them. So if a cow had a calf during your shift, it was your responsibility to ensure the calf and cow were properly cared for, along with the other duties mentioned above. Balancing your work and ensuring everything continued to run smoothly was the main purpose of that job. If you weren’t there to bring in the next group for milking, everything could come to a standstill or the person who was milking would have to stop and get the next group themselves. 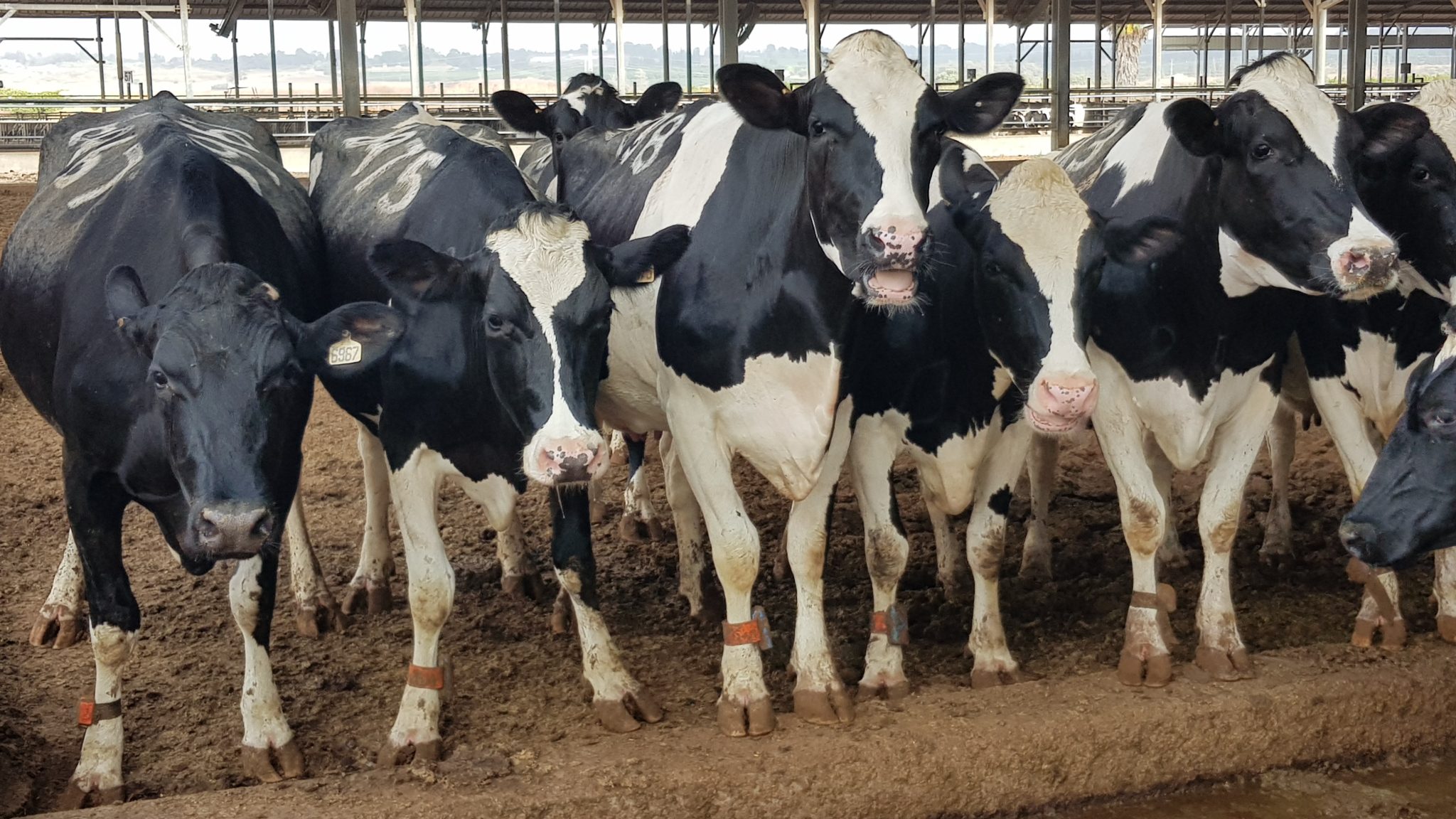 The largest difference between a true corporate job and working with animals, even on a large scale is simple. When I was out there, working with just the animals, there was peace and simplicity to it all. The basic principle of milking and getting dirty, knowing what you are doing will feed a great many people and for my dad, feeding his family and creating a livelihood… well there is a purpose in that. You get to know the animals you work with, and the barn has it’s own rhythm. From the fans running, the parlor humming, and the stalls clinking lightly throughout the barn, the sounds mingle together to create harmony. I used to walk through the barn, listen to its quiet music, and just smile at the simple satisfaction in what I did.

Growing up on a small farm, then moving to a large corporate farm gave me a great understanding of the differences between the two milking systems. While my father supported his family and got to work at home, the advantage of running your dairy farm on a larger scale and as a true corporate culture business, when done correctly can increase your profits and be very satisfying as well. The efficiency in which the large dairy farm I worked at cannot be denied. It was a great experience and one that has only increased my overall knowledge and understanding of the dairy.

For more information about Israel Dairy School, press here to contact us